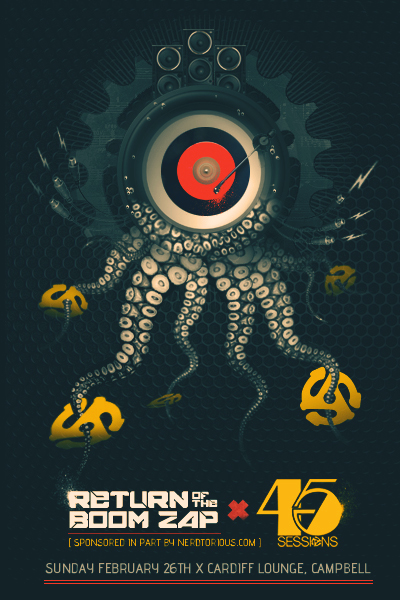 Return of the Boom Zap meets the 45 Sessions

Brought to you in part by Nerdtorious.com

FREE at the Cardiff Lounge, Campbell

“Return of the Boom Zap” represents more than just one or any style of music. It represents an idea and a hope that it can be used and viewed as a place where there are NO RULES musically. A place where a dj can come and show an audience what they represent and be listened to, and respected in their complete element. No outside pressure from promoters, club owners, or patrons that may push a dj to play something that they may not want to.

On the audience end, it’s a place where one can come and not worry about hearing the bullshit you hear everywhere else. It’s a place where you can be exposed to different types of music, real culture, and surround yourself with music enthusiasts, creatives, and community organizers and supporters that may have the same frustrations as you with the lack of variety being offered in your city.

One of the goals set forth from the beginning stages of creating “Return of the Boom Zap” was to serve as a platform for incredible music and dj’s that that have been lacking a proper platform to be heard in the south bay. Most times, the music we like and want to hear and or play, isn’t properly represented in the nightlife options we have available to us. That being said, “Return of the Boom Zap” shifts gears and welcomes “The 45 Sessions”. The 45 Sessions and it’s organizers share similar views on creating a platform for music that tends to get lost in the shuffle. While “Return of the Boom Zap” and “The 45 Sessions” live on polar opposite sides of the musical spectrum, the idea is the same…It serves as an outlet for people to come and be exposed to music that you may not know, that you may have missed, or that you just simply don’t get to hear anywhere else, by some of the most talented people in the bay and beyond.

On Sunday, Feb. 26th, everything you hear will be played on 7-inch 45 rpm records. 45’s were a format that were once on the cutting edge of the music industry, and now exist as rare collectibles. The dj’s playing the event have spent years learning, researching, and digging for these now almost completely obsolete records. Today, there are a fewer dj’s around that have put the time and effort in to finding actual records from brick and mortar record shops without the help or even the existence of the internet. The dj’s that will be playing this event have not only put in the time, paid the dues, and put the years into developing their craft; but they are considered by us, and many more, to be extremely knowledgeable and at the forefront the continued push for the 45 movement.

Live video streaming provided by the Lions Den live on USTREAM.
Catch all the action live on www.djgoldenchyld.com