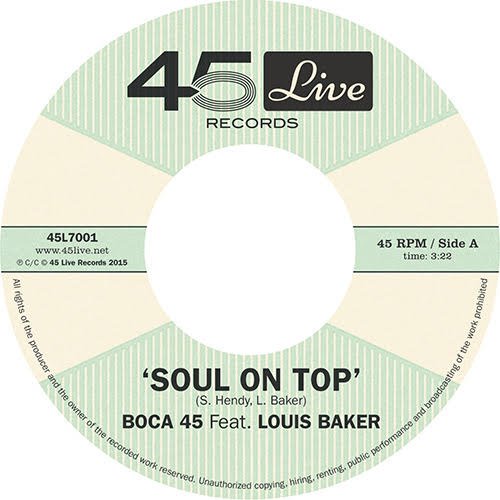 Our good friends over at 45 Live have just released their debut small slice of vinyl produced by none other than the head honcho of the team (and all round nice chap) Boca 45 – and what a stormer it is!

The proceedings kick off with an exclusive new soulful hip hop track featuring the sublime vocals of New Zealand native Louis Baker over a lush funk driven bed of horn stabs, driving bass, rhythm guitar, and of course some hard hitting drums. It’s a mid tempo number that sounds highly polished on both the dance floor or in your headphones.

The B side is also a very welcome addition to the crates with a tune that was previously available as a twelve inch through Unique records back in 2006, but now sees it’s first outing on 45. Musically it’s perhaps more similar in the cut and paste style of production that Boca 45 was known to do with old partner Andy Smith as the duo of Dynamo Productions – and we’re not mad at that at all! It’s bouncy and fun, frantic and funky, and filled with an abundance of obscure grabs and samples.

We here at the 45 Sessions love this new release, and look forward to hearing more from our buddies over in the UK.

Pre-order this release over at Bandcamp.